The Observation Bar on the Queen Mary - a modest proposal

Recently the prime lessee, Garrison Investments, their operator Evolution Hospitality and their historic consultant, John Thomas, have made an effort to restore more originality to what was once a landmark on the North Atlantic, the observation bar of the once grand ocean liner, the Queen Mary.  The original ceiling light fixtures have been refurbished and re-installed, the service entrance to the bar has been opened with the beer kegs installed there in the Long Beach conversion moved to a side location.  Moreover the room's columns have been repainted a bright Chinese red and much of the wood paneling has been polished, if not not restored. 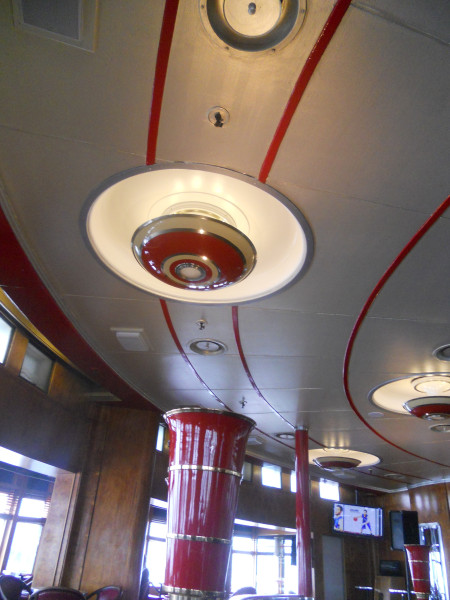 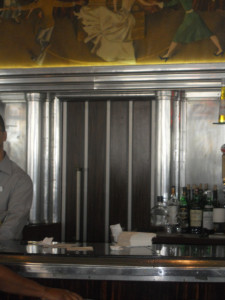 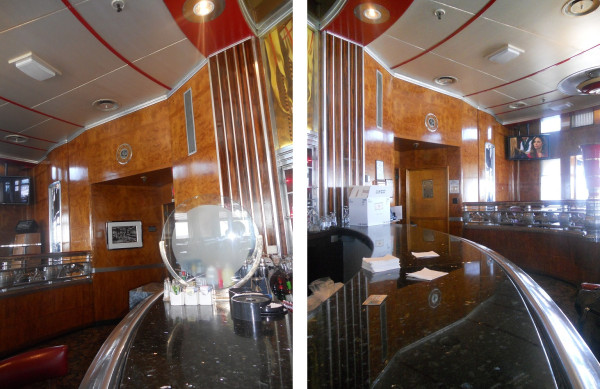 We understand that in the near future replicas of the original bar stools removed in the Long Beach conversion will be re-installed and the iconic painting, entitled Jubilee Eve by will be cleaned and restored and the once gold leafed alcove over the painting will be re-gold leafed and once again properly light.  This leaves the floor covering and the furniture of this room open to reconsideration.

On recent visits to the ship I and others have noticed that many pieces of the original observation bar Waring and Gillows furnishings remain scattered throughout the ship.

Late last year I noticed an original table serving as a condiment stand on the enclosed promenade.  (It has since been removed and placed in storage.) 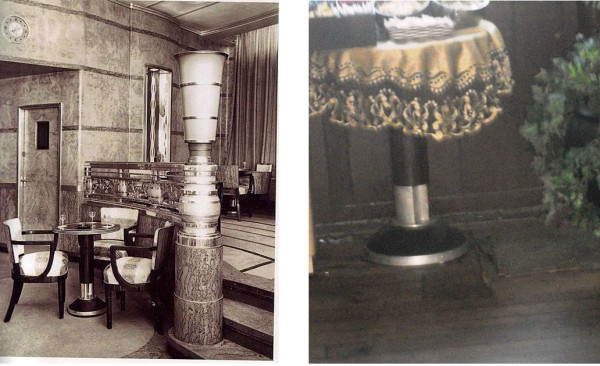 Both original sofas remain on the ship, one is located in the entrance to Sir Winston's bar. 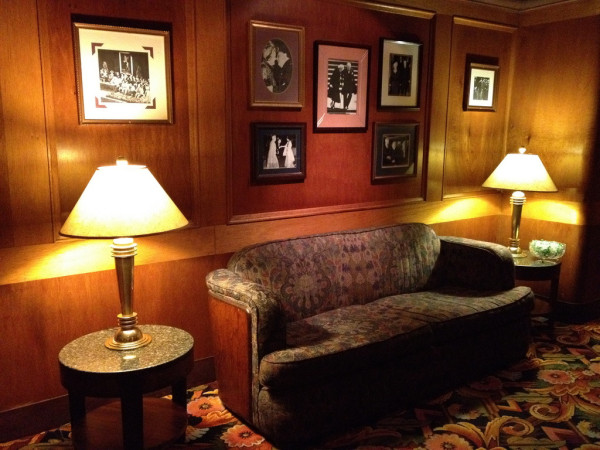 It occurred to me that there may be enough original observation bar furniture aboard the ship to refurbish the lower portion of this bar.   Not only would more originality be returned to this room, but the seating capacity could actually be increased! 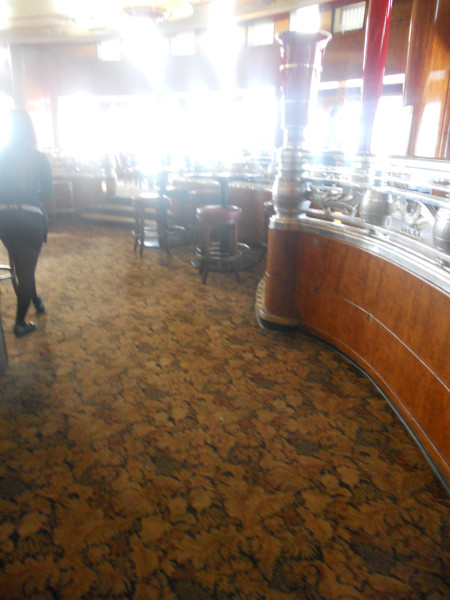 The original seating scheme called for a table for up to three at each entrance side that are now sitting empty.  Moreover in the central portion of the room were two sofas each seating three individuals plus at least three side chairs around each sofa. I count up to 18 seats where there are now perhaps at most ten tall stools. 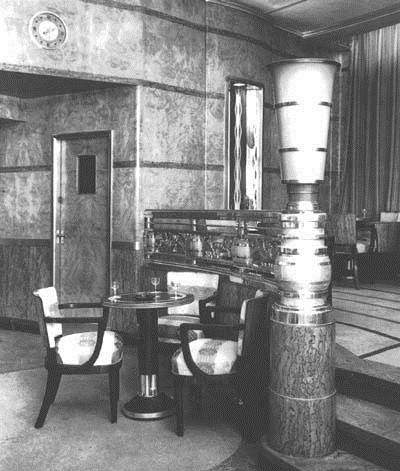 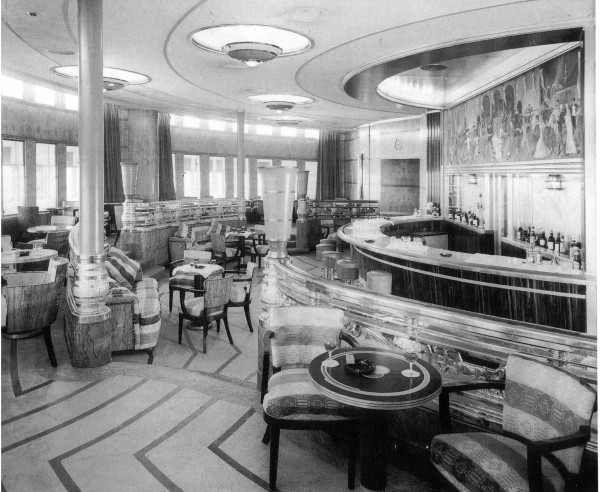 So from an originality and seating capacity point of view the original seating scheme is preferable.  And I recall when the sofas were returned to the observation bar in the early 1980's under the Wrather Port Properties first renovation.  They were spacious, comfortable and always the first seats taken.   Perhaps the cleared lower area is now meant to accommodate larger groups of standees but is the Observation Bar a place for mini-raves?

Furnishing the upper level of the bar and the extension added in Long Beach would require additional furniture.  These might be copies or adaptions of the original designs.  But the first impression as you enter the room is of the lower level.  And this might be refurnished with original pieces.  Attracting a crowd that would appreciate the ambiance and is willing to pay the charges on the new menu is a challenge for the operator.

The challenge of how best to treat  the floors remains to be addressed.  Sadly a portion of in-service linoleum was recently uncovered and unceremoniously destroyed.  The lack of involvement of the Long Beach Cultural Heritage Commission and the anemic interest in the ship by local preservation groups continues to be a sad reflection on the cultural state of our city. 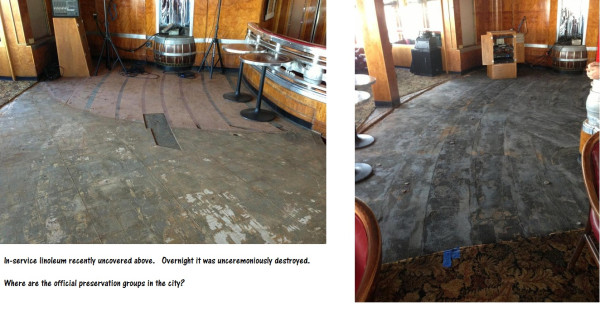 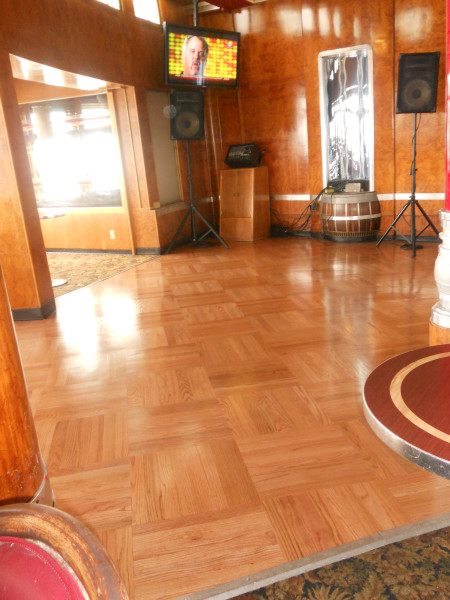 The finished floor is handsome, but is it sacrificing originality unnecessarily?


Shortly after you enter Long Beach on Second Street in the Naples neighborhood you encounter a sign that is a reminder of one of the city's past public relations campaigns -- perhaps from the 1970's.  It say "Long Beach, international city".   Above the words is a profile view of the RMS Queen Mary and a globe.  Apparently the commitment that was implied by the purchase of this great international icon was lost on its citizens.  It put Long Beach on the world map but those who should be her caretakers simply can't find the time to follow up on what should be their pride and joy. 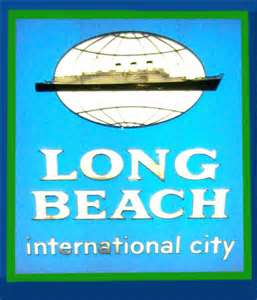