It’s hard to believe that we will have lived on 475 E. Town Street for close to two years. The past twenty four months have been filled with learning the bones and the personality of the house as well as exploring the history of its past 120 years and its residents. But most of all it has been filled with the challenge of turning an empty period house into a warm, inviting home for my understanding husband and my two college-aged children. 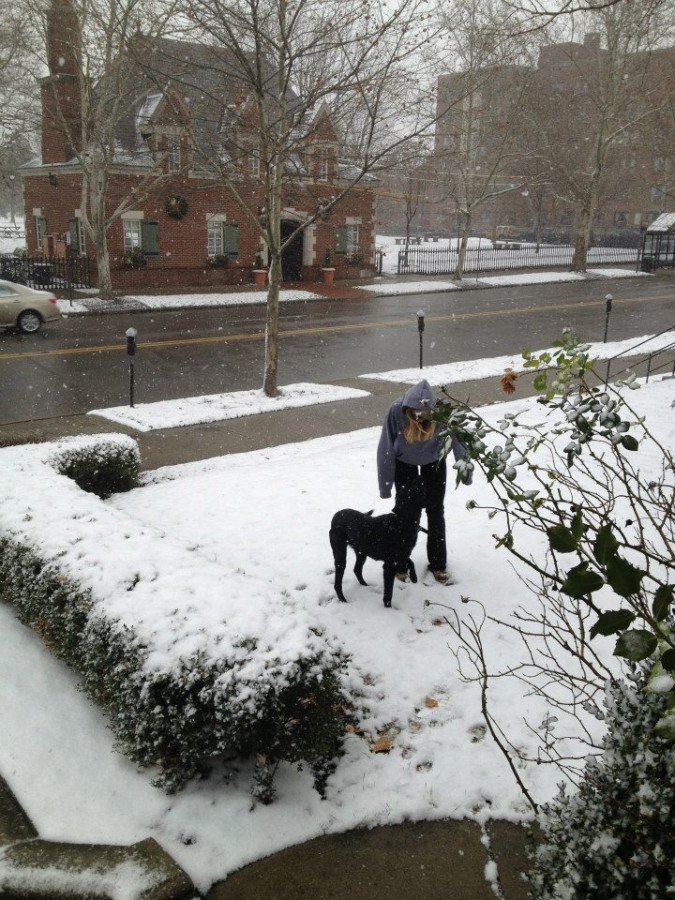 Margaret Geppert, our teenage daughter along with our black labrador, Shadow, enjoying the snow at 475 East Town Street.  This is California born Shadow's first experience with snow!  He has made the adjustment to living in a historic home the most easily of all of us.  And he gave left a two acre lot in California to do it.  Way to go Shadow!

The house started out as a home for Simon and Clara Burgunder, built in 1895 in tandem with the neighboring twin house, on what was once a single lot.  But apparently the Burgunders had to sell the house in 1903 when their  business ran into difficulties. In spite of that difficult beginning for most of its 120 year history the house has had only three principal residents.

The most interesting time period of the house to me is when Frank Davis owned the house.  Born in Upstate New York to a father who was trained seaman, Mr. Davis was lawyer by training. (University of Michigan, class or 1881.)  Davis was also an investor and businessman.  His office was in the Wyandotte Building which is within walking distance of the home.  (Note: The Wyandotte building was designed by David Burham of Chicago.) Mr. Davis next door neighbor, in the “twin house”, was Harry Daugherty, also an attorney, who in fact became the United States Attorney General under the Harding Administration -- during the Teapot Dome Scandal.

Frank and his wife Carrie Davis lived in 475 with their small daughter Ruth, who sadly died at age 7 in 1910.  Carrie also passed away unexpectedly after appendicitis surgery in 1914 at the age of 45.

Shortly thereafter Frank Davis married a woman named Margaret. They spent the early part of their marriage traveling through Europe with an eye for purchasing pieces to remodel their home which was initially considered just a locally constructed “modest” Victorian home, the twin of its next door neighbor.

Many local historian and architects now describe the house they left us as “opulent”.  The remodeled house exhibits world-class craftsmanship, something Mr. And Mrs. Davis would have wanted to display if they moved in the circles of J.P. Morgan and Maria Longworth Nicholas.

Frank and Margaret Davis certainly turned their home into a showpiece. While it not known who was the architect or the builders/contractors were for their major remodeling done from 1914 to 1919, Mr. Davis was working for J.P. Morgan of New York. At the same time Mr. Morgan was building his own home in New York and it designed by McKim, Mead and White. 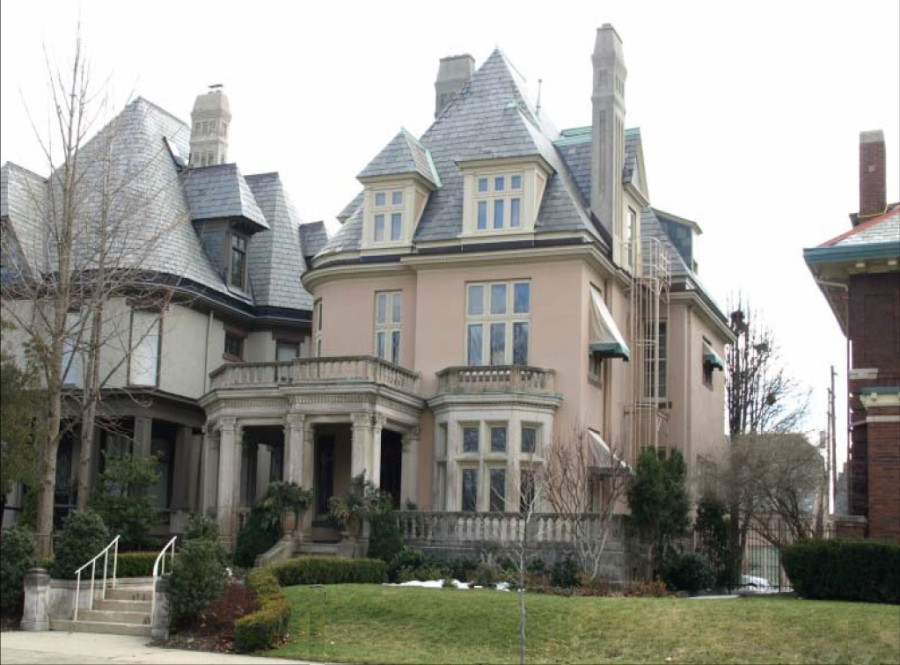 475 EastTown Street and it neighboring "twin".  Both houses were built at the same time on what was once one lot.

One of the features that Frank and Margaret added that is spectacular is what is known as the Rookwood Room.

A note on Rookwood Pottery: The Rook wood Pottery Company was founded in 1880 by Maria Longworth Nicholas. She was the first women in the United States to own and run a manufacturing company. Setting the standards for excellence. Maria was instrumental in recruiting artist, chemist and ceramic specialist from all over the globe. In addition and  along with the others on the Board of Directors she stressed the importance of “competing “ or learning from the best. the world class event Paris Grand Prix of 1890. Rookwood took first place. Maria Longworth Nicholas , converted to Catholicism in early 1900’s.  She was the god Mother to Kermit Roosevelt, Theodore Roosevelt’s youngest  son, and she called the Ritz Hotel of Paris her home during the last decade of her life.

Both Davis’ wives were active in the Symphony and Margaret started the first used clothing store at Grant Hospital for both patients and staff donated by affluent women of Columbus. They were members of the First Presbyterian Church on Broad when Tiffany and Company was commissioned to create the stained glass windows in 1920's.


What was Davis’ intent in the remodel of the house? Was it to demonstrate his standard of the quality of living and to inspire the citizens of Columbus?  Or was it simply to be a tangible reflection of his life.  Frank Davis is buried next to his first wife and daughter with a large yet simple marker that reads:

DAVIS
Thy will de done


After Frank Davis’ death in 1937, his widow, Margaret, sold the house.  Ultimately Dr. George Heer bought it and he and his second wife, Virginia, (19__ to 199__?)  lived there with their two children, Christine and George Jr..

The Heers experienced a little less of the opulence of the house as the first floor served as Dr. Herr’s medical offices. The hallway that still separates the library/living room from the dining room on the first floor dates from the Heer residency.  It was built to provide access to patient examination rooms built in the original kitchen at the back of the house, while allowing most of the library/living room to serve as Dr. Heer’s private office.

The second floor served as the main living area for the family.  The front sitting room, sometimes referred to as the “captain’s room”, (for Frank Davis’ father that had lived at 475 with his son), and other times as the “Columbus room”, served as their living room.  The Rookwood room was used as their dining room. The Heer family assisting Christine seen here celebrating what appears to be her fourth birthday in their dining room in the Rookwood Room in the late 1950's.
Mrs. Herr remodeled one of the second floor bedrooms to serve as a state of the art kitchen in the late 1940’s walling in a fireplace in the process. Cabinets and stainless steel sinks were order from the same vendors who supplied the Mayo Clinic.

Their children, Christine and George, lived on the third floor, an area that is simple in design. The Heers’ added a third story back porch with great views of the city and which, I am told by Christine Heer, was a great place for teenage parties.

Ronald Slotter, a cement manufacturer, deserves great credit for the restoration efforts he made when he bought the house in 1997.  They including updating the infrastructure of the building, HVAC, strengthening the foundation and restoring much of the woodwork seen though out the first two floors.

Mr. Sloter removed the medical examining rooms left from the Dr. Herr period and installed an up-to-date professional kitchen where the original one had once been.  Unfortunately, he left the hallway that the Heers added that separates the library/living room from the dining room.  It remains in place …. for now.

A determined lawsuit by his sibling and the recession of 2008 significantly diminished the value of the endowment he left to support the project. The Columbus School of Design felt that without a large endowment they could not maintain and use the house and property as Mr. Sloter had wished.  So in 2008 they put the house up for sale.  It sat empty from 2007 until 2012.


Jeffrey and Cathryn Geppert and family, 2012 -

We bought 475 East Town Street in February of 2012 and moved into in mid-year.  We found this marvelous townhouse with world-class world paneling, eight fireplaces, (two on the second floor are walled in), and a grand staircase reminiscent of one that had existed on the Titanic. 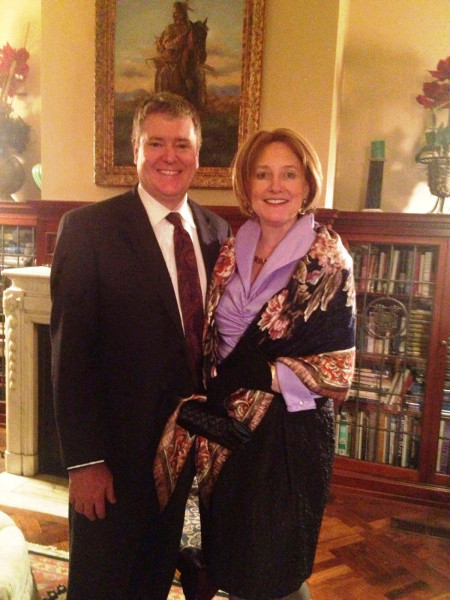 Ready to head out to a benefit with my understanding husband.

While Mr. Sloter made significant efforts to stabilize the house and its elegant paneling and floors, being a bachelor, he was less concerned about the plumbing.  None of the showers were in working order when we moved in.  The heating system we inherited is distributed through five furnace rooms.  And while there is some built in furniture, we had essentially a large empty house. Fortunately the furniture I've been carefully collecting for the past 25 years fit the house very nicely.  It was almost as if it were meant to be in 475 East Town Street.  It certainly does not look pristine like I bought it all at one time through some decorator.  I hadn't. 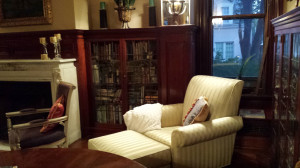 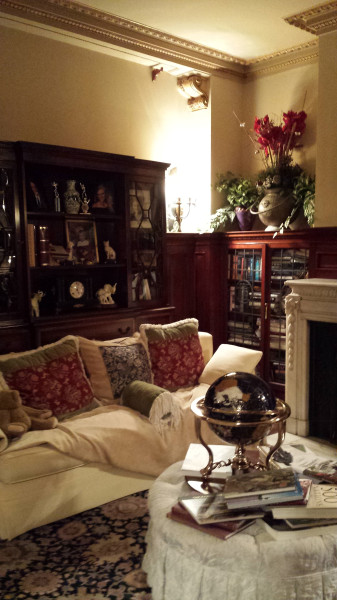 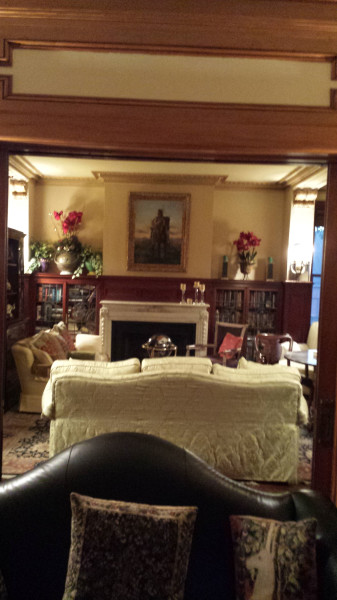